Data is only as good as it is accessible; think needles and haystacks. The WECCLT models generate 797 million hourly forecast records every day; try finding a needle in that veritable universe of haystacks. But it’s not that hard; Ansergy makes it easy to find every needle in just minutes with our proprietary Long Term Interface (LTI). LTI has several features which allow a user to quickly drill down to the most important components of the forecast. We offer five views where we define a view as what the user wants to compare. 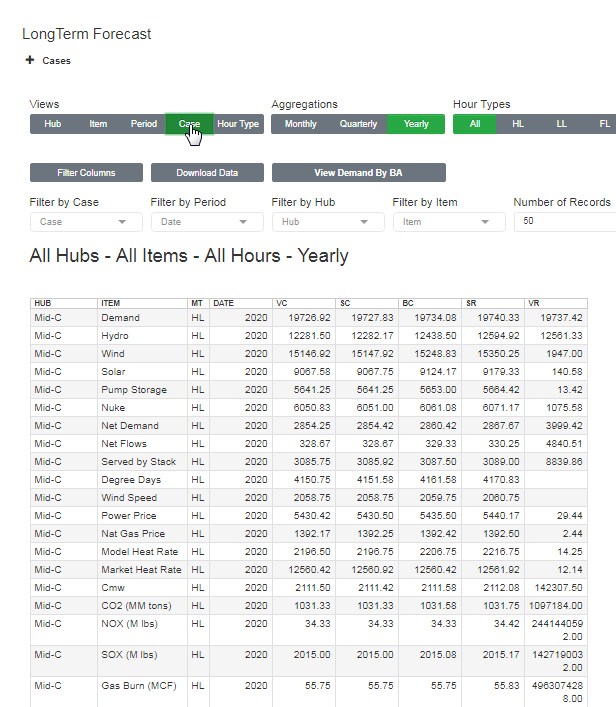 Ansergy generates five cases for each run. It is possible that a case can be customized by a user, but Ansergy offers five Standard Cases by default. In the above table, we’ve stacked items by case by year (the first 20 items are displayed, an additional 25 are available). This is a helpful view to drill into why something is changing as you can see individual forecast items by case. It’s simple to change the period. Â We’re looking at 2020, but you can pick any year, quarter, or month (or even all records).

Less bearish than VC, but the second cheapest of the five cases

Uses all of our Best Guess estimates

The most bullish case

Ansergy built WECClt to easily incorporate any sensitivity a user would like to test. These could include the following scenario types. 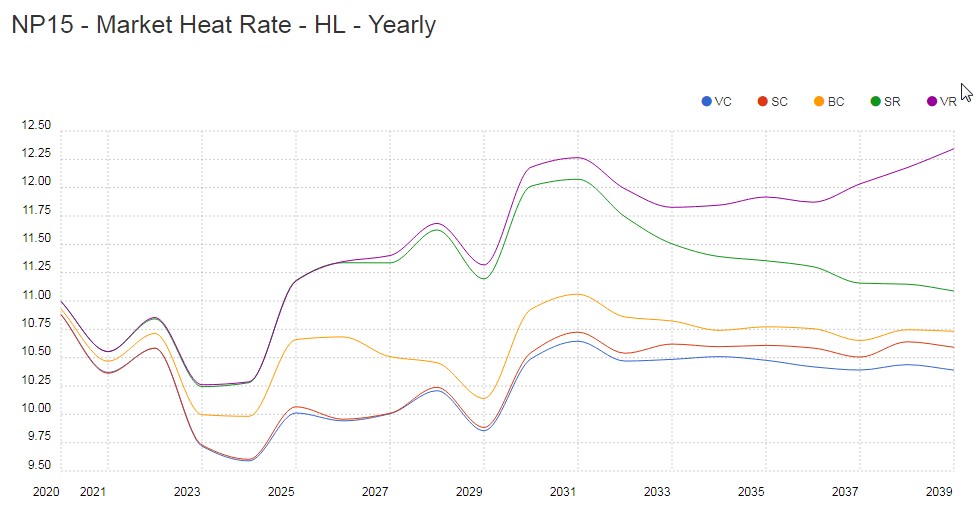 Charts are lovely tools for viewing data across time. This plot is for NP’s heat rates for all five cases.

Item view is useful for plotting one item against another. Below is an example of the Item View: 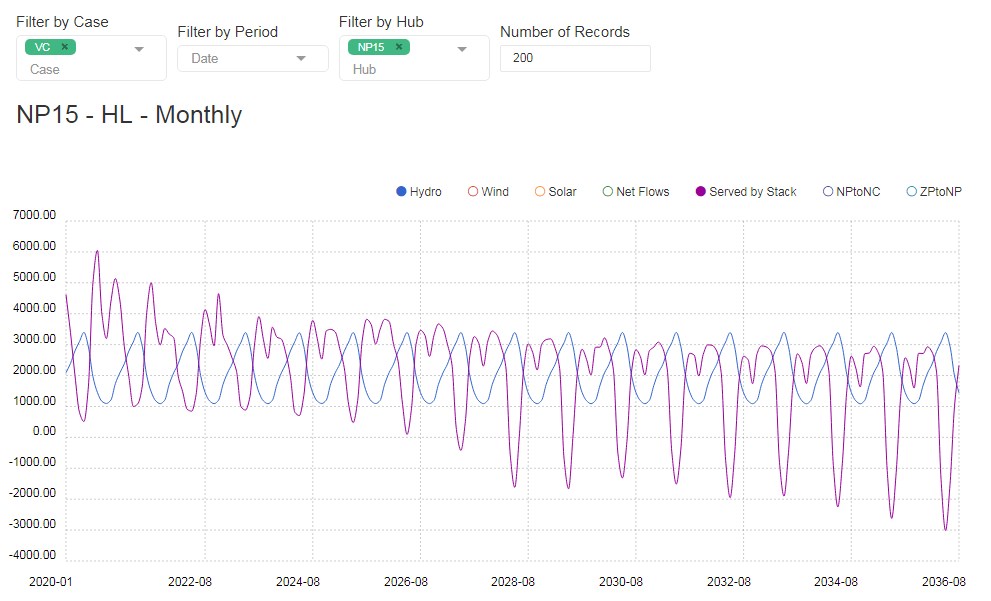 Hydro is plotted against Served by Stack for the VC case. The hub isn’t able to keep gas on the margin for a few months each year, and this simulation is done with average water. The problem is exacerbated in heavy water years. 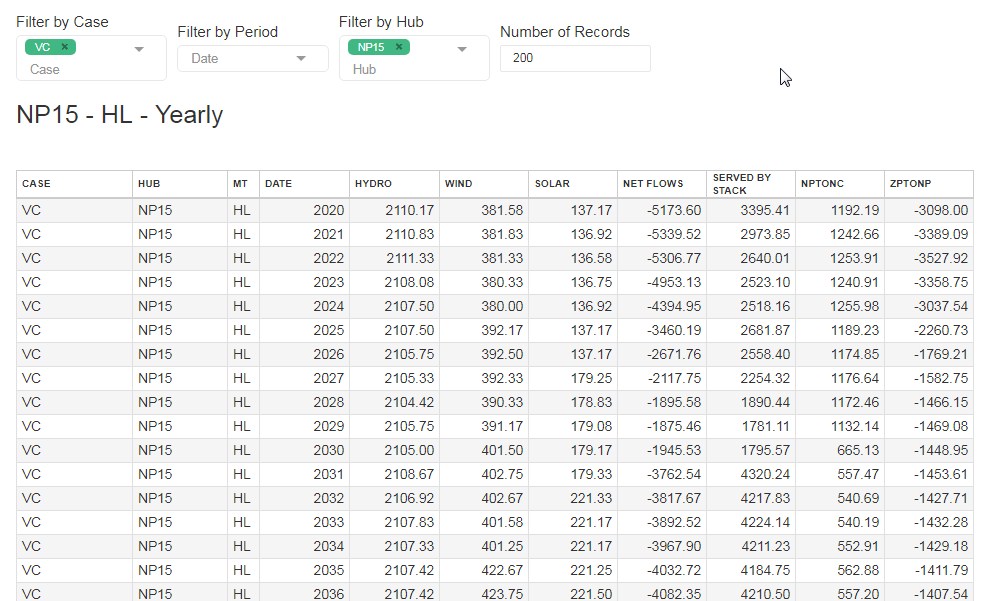 This is a good audit view as it crosses by the period (Month, Quarter or Year). 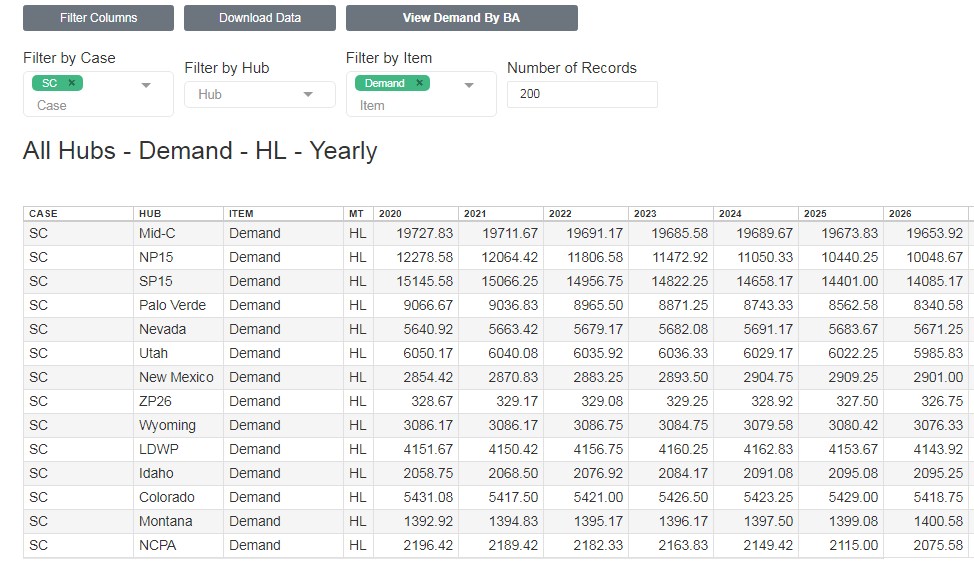 In the above, we are looking at Demand for the SC case for all hubs by year. You can also drill down and view just one hub, all items. 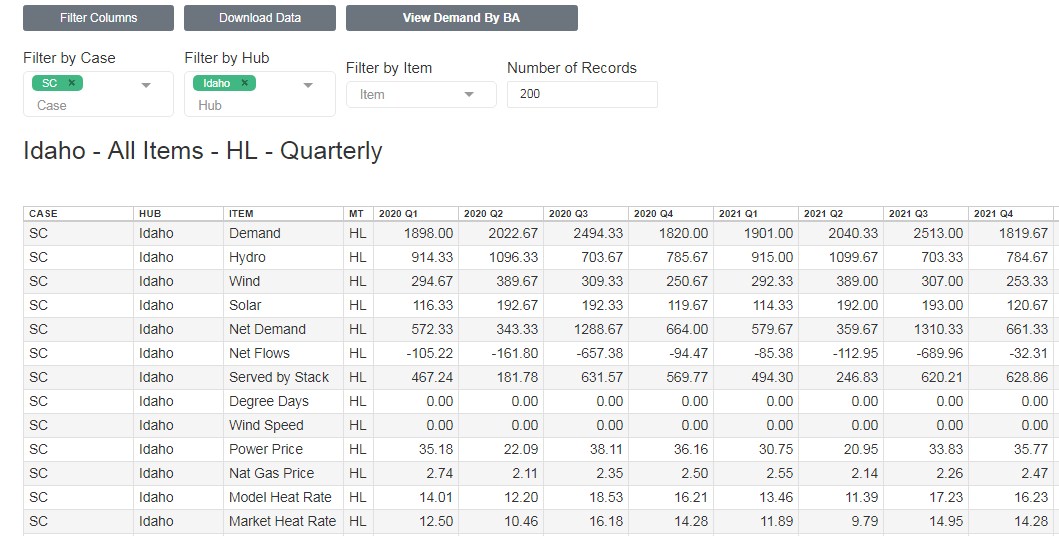 The Distributed Generation forecasts destroy on peak demand during the solar peak. That is best seen in a chart. 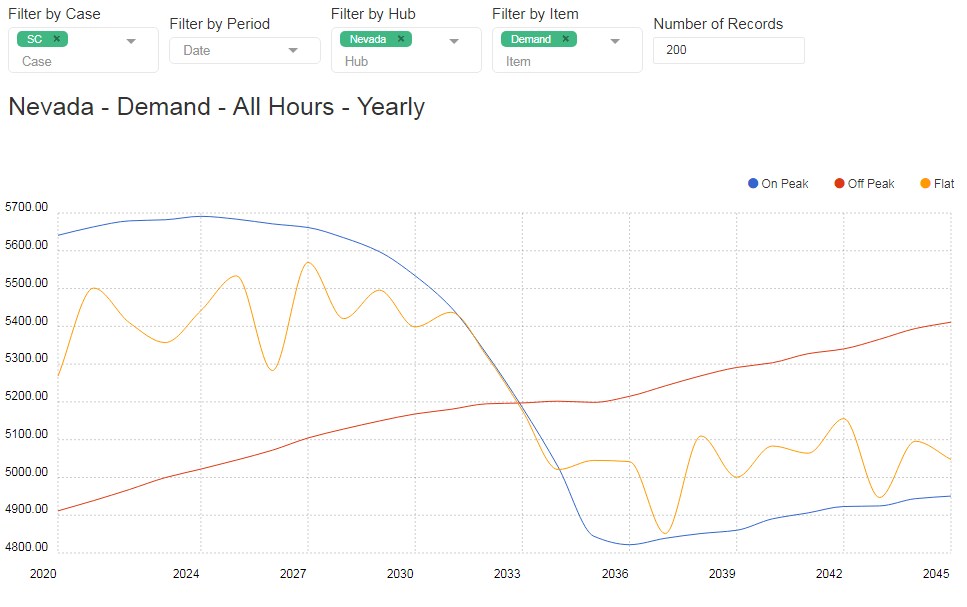 Note the upward sloping off-peak demand, partially driven by night time EV load and the plummeting on-peak. Flat also tanks but not like on-peak. Here are the heat rates: 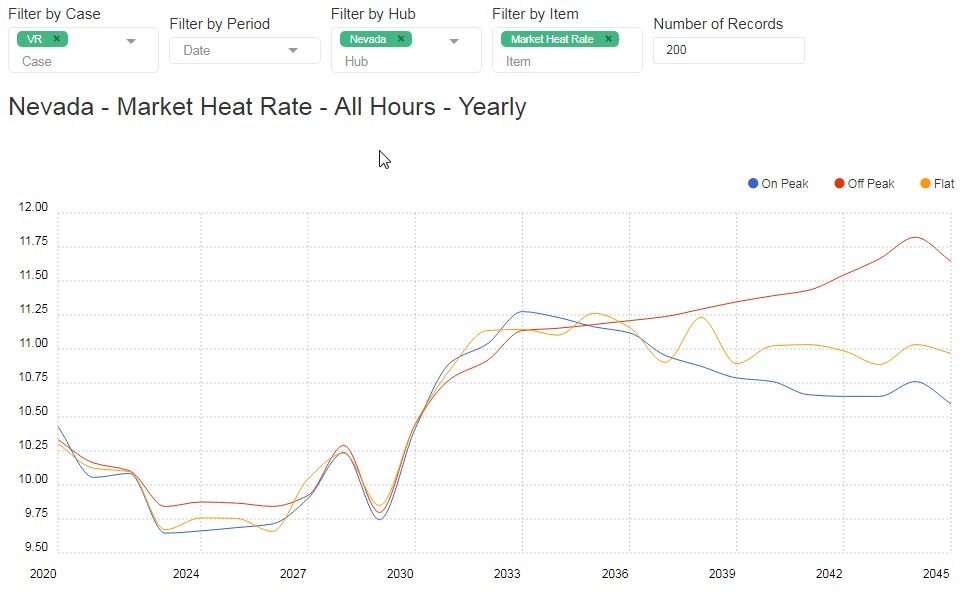 The case is changed, this is VR, but even with the most bullish case, the off-peak heat rate surpasses on-peak by 2035.

All BA load forecasts are available in a related interface:

The interface (UDI) is similar to the full forecast interface, with a couple of twists.

Versions of UDI can include any utility using the EIA 860 splits. Let us know which utility you’d like modeled, and we can provide the data. 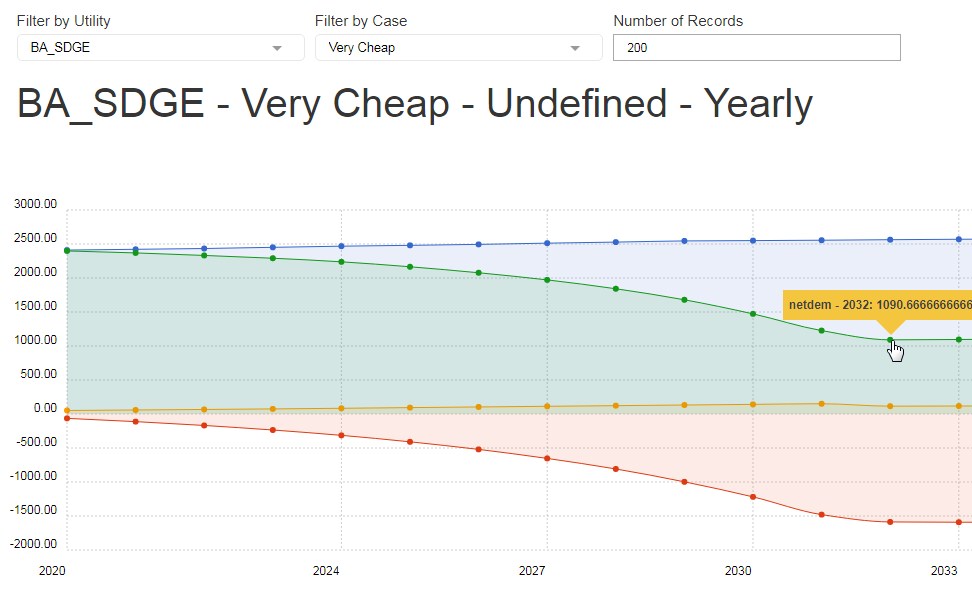 This chart is an area plot of San Diego Gas and Electric’s four demand components by year for on-peak. With a click, we can focus on Solar Peak hours: 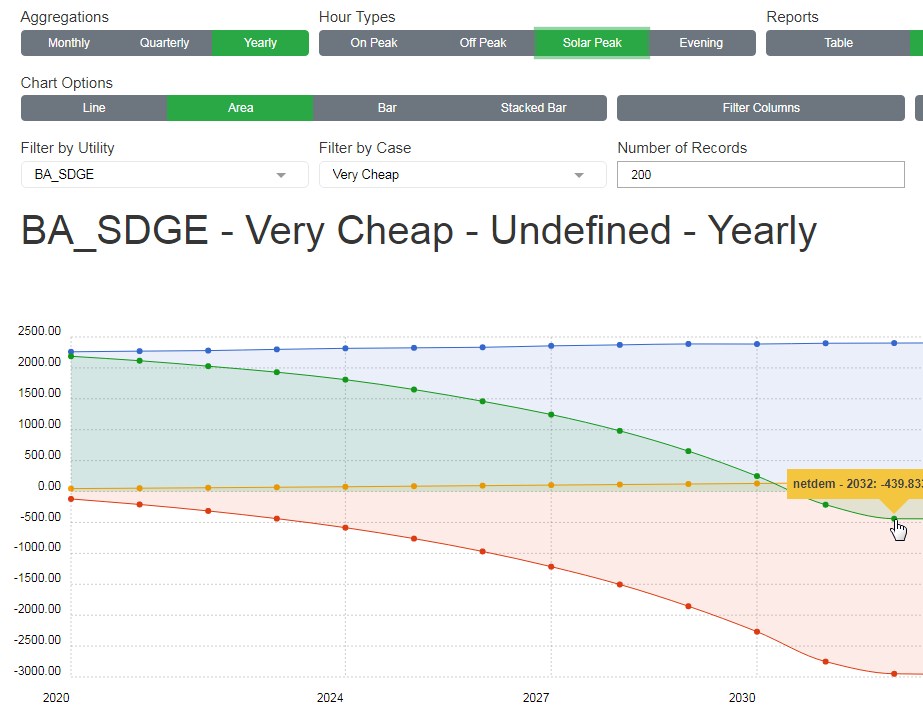 From this, we see a startling result – negative average loads during solar-peak hours. The utility has become a Genco for the rest of the WECC, the ISO’s second ZP. Need to drill deeper, how about monthly? 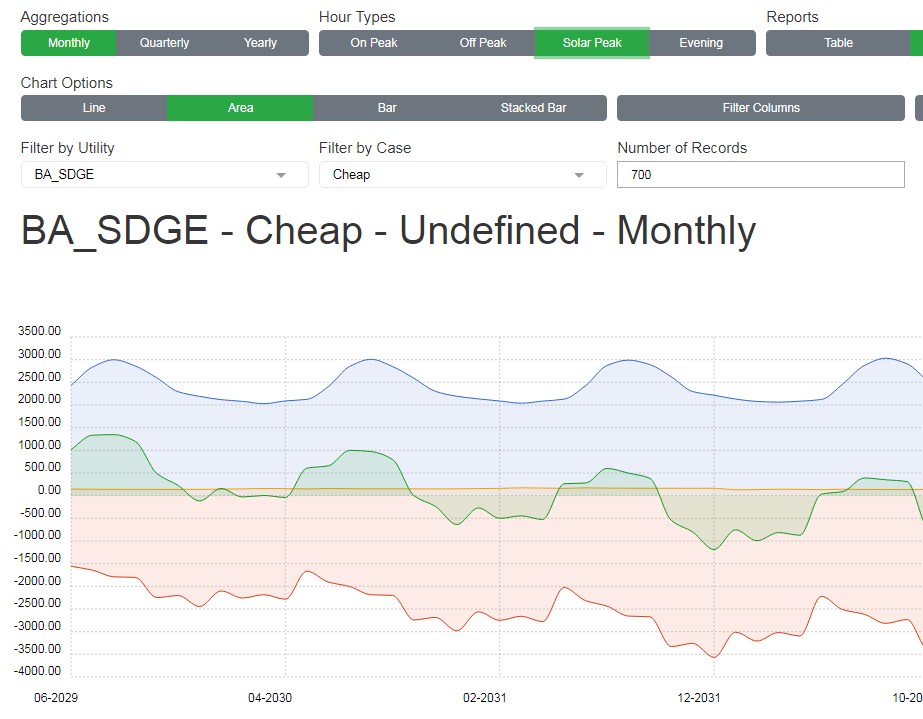 Every chart comes with a zoom feature to pick out specific strips of dates, here we’ve zoomed into the June 2029 to October 2032, by month, for the Solar Peak hours.